Beast images are random, so you could get the same beast as another player. All starting stats are random too.

If you're after a custom Beast image, you will need to become a Neko Chan Patron. Either Onyx, Diamond, Neko or RPG Premium III rank. If you sacrifice your beast while one of these ranks, you will get the same image back.

Now that you have a beast, here is what you can do with them. You can send them on hunts, they will help you attack bosses, you're also able to train your beast every fifteen minutes, you're able to recall them from hunts and you can sacrifice them to gain max health and Demonic State, to do this you'll need Demon Scrolls.

As of the August 2019 update, you gain way more max health than before. The amount of Max Health is now calculated this way.

If you sacrifice your beast to a Demonic Lord, you will only get a smaller amount of Max Health. The way this is calculated it:

You can't make your beast do what you want, as they have a mind of their own. Sometimes when you send them on a hunt they could take longer then the hour. However you can buy potions, that will raise their levels and their accuracy with the elixirs that can be found in the Super Nekocoin Shop.

Accuracy Elixirs are for a limited time. Once used have a limited amount of hits, then your beast's accuracy will go back to 25%.

As of the March 2020 update, there is now a way to reduce the time your beast takes on hunts, by 30 mins. You need to buy land and blueprinds to build your beast a House. Once complete you will then also be able to send your beast on a long hunt. Those hunts run for 12hrs.

Along with some Neko Coins, these are just some of the items you could get while hunting: 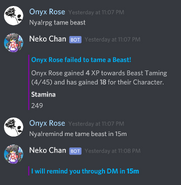 Going on a hunt with your beast

DM from Neko Chan, with loot

Recalling beast before the hour is over, no Loot will be given
Community content is available under CC-BY-SA unless otherwise noted.
Advertisement